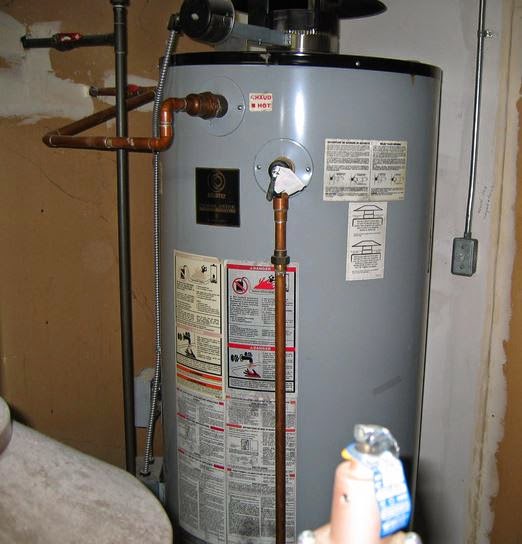 Shortly after wifey and I borrowed books from the library, I started reading a book about saving money.

It offered the typical advice. Don't spend more than you make, don't finance your cars, etc.

Some advice offered was more for the times (the updated version of the book was published in 2009) when index ETFs weren't so ubiquitous like how to find a good money manager for your investments, etc.

While most of the reading was good reinforcement for what I was already doing, I came across something I didn't know was an option: Owning your own hot water tank.

Seems in Ontario, renting a hot water tank is as common as white on rice. It's the thing we do here. Why? Seems the Government of Ontario (past and present) have failed the consumers in this regard. Hot water tank rentals are mostly unheard of outside of Ontario.

So what's going on exactly? Well, seems when your home was built, the gas company installed a hot water tank. However, instead of adding the hot water tank to the cost of the house, they instead charged a monthly fee to rent or lease the tank. If you sell your house, you also transfer the lease to the next owners. You probably didn't pay much attention when you were signing the transfer documents at your lawyers office. Wifey and I certainly did not. I vaguely recall the lawyer telling us about the hot water heater lease, but as everyone else was renting, I just assumed there was no other option.

Anyway, over the years, seems the gas companies got out of this business and sold the rights to two other companies. Since it's still open season on consumers in Ontario, now there are a lot of smaller companies offering these services as well (and a lot of nightmarish incidents being shared of how homeowners are being swindled into signing long term leases to change their hot water tank and to switch companies).

So what's the point of renting out the hot water tank? Well, it's guaranteed cashflow. Instead of getting $1,000 (assuming a high end top of the line hot water tank) one time, they can get somewhere in the range of $20 to $45 a month (at least in our area) for as long the house is still standing. Well, assuming $45 is the cost to rent the hot water tank per month and the tank cost the rental company $1,000, after 23 months you're just rolling in the profits. That's less than two years!

Now take that one heater and think about how many houses are on your street... In your neighbourhood.... your city... That's a lot of money! No wonder the hot water tank rental business is so hot!

So what's in it for the consumer? Well, theoretically, the company owns your tank. So if it breaks down, they are in charge of fixing it. If the tank is beyond fixing, the company will replace your tank for free. I mean, they've already made money off you, the $1,000 tank is just another way to ensure you'll stay with them longer.

So how do you own your own hot water tank? There are two options.

1) You buy own hot water tank and install it.
2) You buy-out the existing tank installed in your home from the company leasing you the tank.

Wifey and I opted for option two.

I contacted the company that was renting the tank out to us. We were paying a shade over $20 a month to rent the tank.

While I cannot disclose the amount I was quoted (due to a NDA... yeah, seriously), I calculate that in a few years, it will pay for itself.

So what's the downside of owning your own hot water tank?

First, you're solely responsible for fixing your own tank. That means you'll need to call a plumbing or technician to fix your tank if hot water is not available.

Second, if your tank breaks down and is beyond repair, you're solely responsible for replacing your own tank.

The average tank lasts for 15-20 years. Our tank was installed in October 2005, so just a bit under 10 years. I estimate that our tank will last another 5 years.

Another thing to keep in mind if you're considering owning your own tank. Due to some building code regulation change in 2007, different pipes are now used to vent the exhaust from the house. However, most houses built before 2007 still use the older pipes. That's still okay. However, any changes or renovations require following the new building code which will mean added cost to replacing the pipes to be up to code. This was one of the reasons we went with buying out the hot water tank rather than buy our own. Wifey and I don't have the time to stay at home to supervise the installation and renovations. Plus, the in-laws are not living with us at the moment to supervise.

Already, it's been a month since we bought out the hot water tank. The gas bill has arrived and it's $20 lower. While we did have to pay a hefty sum up front, it's going to be worth the cost in a few years.