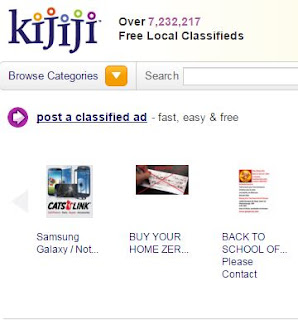 I've always browsed the listings of Kijiji. I never purchased anything or sold anything previously. It was interesting to see what people had for sale.

When I was looking for a mobile phone, I did some research on Kijiji to see if I could find a smaller sized phone for for a decent price. Unfortunately, I didn't, but I saw many listings for iPhones and the like and directed some co-workers there to look into phone for themselves.

For the past week, I was thinking of all the extra stuff (really could be labelled junk) wifey and I had in the basement. Aside from the empty boxes that show our consumerism, we have things like skipping ropes, a foot massager, and a home theatre system... to name a few.

As I wanted to try my hand at selling something, I decided to try selling my passive HD TV antenna. I bought the antenna back in June of 2014 and detailed the purchase in a small blurb in this post. After the success of receiving my sister's HD antenna, we were excited to add some channels to other TVs in the house.

Well, while the antenna worked, it wasn't as powerful as the antenna my sister gave me. You see, the antenna I purchased on Amazon was a passive antenna. It simply received the signals and sent them to the TV. My sister's antenna had the capability to receive the signal and AMPLIFY it before sending it to the TV. As a result, we are able to pick up a few more channels. Not a big deal really, so we dealt with it.

That changed a month ago when I wired the main floor with network ports. The plan was simple. Move the cable internet modem downstairs thereby freeing the cables running to the main floor to connect to the TV. There is an intricate system of cables that is running through the house. Likely the previous owners had cable boxes all over the house. As a result, they split the connection coming from Rogers to multiple rooms. When we moved into the house, we just set up the cable box and internet modem in the living room as it was where we foresaw us spending the majority of our time.

I moved all the internet equipment downstairs and freed up the TV cables. I then hooked up the HD antenna and split the signal to three rooms in the house. As a result, we no longer needed the passive antenna in the living room. It did its job of giving us live TV in the living room for over a year. I have no complaints.

The problem is now we had a perfectly usable $45 HD antenna collecting dust in the basement. Actually, according to Amazon, the price of the same antenna is now $60! Yikes.

I finally gave in and decided to list the antenna on Kijiji. If wifey and I couldn't make use of the antenna, perhaps someone else could.

I listed the antenna on Kijiji on the 13th of October for $30.

To be honest, I didn't expect any responses. I was surprised to receive a response that night. We went back and forth a couple emails, but they lost interest when my lowest price wasn't low enough for their liking.

Thinking it wasn't going to sell at all, I was even more surprised to receive another email on the 15th. We went back and forth, and it seemed the potential buyer was interested. He wanted to look at the antenna so we decided to meet at a neighbourhood school.

At the designated time, we got together at a nearby school and he inspected the antenna. He had a few questions. Does it work? Where did we have it set up? I answered as best as I could. He mentioned he wanted to get an HD antenna for his girlfriend downtown.

It looked like he was sold. We just needed to work on the price. He offered me $25. I expected a little negotiation. Which is the reason I listed it for $30.

I did my best to sound shocked. "$25?" I looked to wifey (who accompanied me) and she nodded her approval, and I agreed. They buyer handed me the money and kept the antenna. The deal was done.

As soon as I went home, I removed the ad from Kijiji.

I noticed the ad received 18 visits. Not bad I suppose. Never sold anything on Kijiji before so no idea if that's good or bad. The ad itself wasn't very detailed. I just listed the 7 channels we were able to pick up. I also listed the link to the Amazon listing if they wanted to read more about the antenna.

Anyway, now instead of having the antenna sitting in the basement, I had $25 to show for it. Yes, I ended up -$25 for the whole ordeal, but wifey pointed out that we used the antenna for over one year. That's a lot of money saved compared to a TV subscription with Rogers. It's also a lot better than the -$50 we were at before we sold the antenna.

Overall, it was fairly pain free.

I wonder if there's something else we have that we can sell.