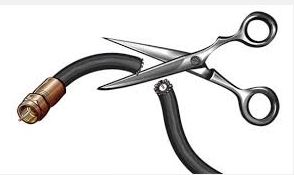 Two years ago, I posted about cutting the cord and ditching Rogers cable for good.

It's been two years since we made that decision and when I brought it up with wifey, she was surprised. She felt like it wasn't that long ago we ditched the cable, and she hasn't really noticed. She attributes this to the fact that we still have access to the basic channels we had before.

Mainly, CBC and CityTV through the HD antenna my sister gave us two years ago when she moved in with her boyfriend (now husband). Even now, our television watching has been limited to mornings and the odd evening when there is nothing to be done between 7:30pm and 8:00pm*.

I can't say that we're more or less happy that we cut the cable. Really, it's freed up some time that used to be spent on TV. Wifey would sometimes turn on the TV to see if there is anything on (usually, the answer is no), and we'd end up reading or talking about stuff. With baby number one on the way, we've been busy following the movements of baby girl. I've even taken the time to read my book out loud so she can get used to my voice. It seems to have worked as wifey says the baby is really active when I'm reading out loud. Personally, I think she's trying to find a quiet place to get away from her old man's ramblings.

This, of course, is preferable than having baby girl get used to the voice of that guy from Survivor (never got into that show, surprised it's still on) or even the girl from that other show on TV, whose name escapes me at the moment.

That's not to say we don't watch TV at all. As I mentioned previously, wifey has gotten hooked on Coronation Street (a British soap opera). Unfortunately, she missed a lot of episodes thanks to the NHL Playoffs that were on CBC. Aside from watching live TV, sometimes, we watch shows that are available online. Specialty channels like HGTV contain a lot of content. Even YouTube has a lot of content available at the ready. Of course, even CBC has a number of their programs available on their website. Though, who has the time to watch all these shows?

Aside from reading, sometimes wifey and I sit outside in our backyard and talk about small things like work or about the people in our lives. Dear goodness. Now that I think about it, we hear a lot of gossip thanks to mother-in-law and her friends. Apparently, the neighbours are contemplating divorce because the wife wants to send the kids to private school** and the father thinks it's a waste of money and thinks public school is an acceptable option. From what I heard, it costs $2,000 a month for this particular private school.

That's another mess we can discuss another time.

However, while we are on the topic of money, seems we were spending $44.84 a month at the time we cancelled the cable. As a result, we saved over $1,000 in the two years since!

Not a lot of money? Well, $1,000 goes a long way. That's extra money that goes into the TFSA. At the end of the year, that $1,000 is one third of the payment for our home and auto insurance. When our baby is born, that $1,000 can be put into an RESP and be eligible for the bonus 20% grant the Federal government gives to reward parents for saving for a child's education. That $1,000 has now turned into $1,200! Just like that.

Alternatively, that $1,000 can be put into an RRSP to reduce our taxes by roughly 35%. That means the $1,000 is now effectively $1,350. If we end up retiring early, we won't need to pay taxes on that amount as long as we withdraw the money in small increments each year. Sweet deal, huh?

Of course, not everyone's cable bill is as basic as our own. My co-workers have reported paying from $80 to $150 a month in cable bills. That's beyond crazy. At $150 a month, that's a savings of $3,600! That's not including the growth you get from stashing the money in an index fund or ETF or something as simple as an RESP or RRSP.

Of course, this talk of costs doesn't even factor in the time cost. How much time are you spending watching television? What else could you do instead of watching television? There are a lot of chores around the house. Even watching television 1 hour each day will end up costing you 15 days in a year! What can you accomplish in 15 days! How much is your bi-weekly paycheque? That's about 10 business days of pay... you do the math.

In short, wifey and I don't have any regrets cancelling the cable with Rogers. In fact, despite being two years ago, it really still feels like yesterday we cut the cord.


*Plus hockey when it's on. It's on quite a bit during the playoffs. But normally, just once a week on Saturday evenings.


**We think the reason this woman is against public school is the fact the Ontario Government introduced the new sex curriculum and was gravely misinformed as to what the kids would actually be learning by her friends and other Chinese language sources.