Expensive Weddings: Are They Necessary? 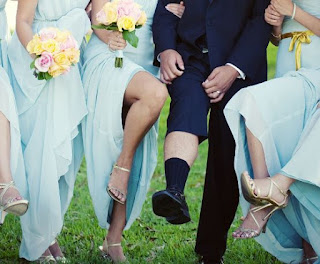 This article caught my eye this morning. Essentially, it details the high cost for people to be a part of the wedding (not brides or grooms) and for being guests at a wedding.

However, that's how it is. One friend does it and the other friend does it too. It's just a vicious cycle and the only people benefiting from all this are the businesses dedicated to suck you dry of your hard earned money under the pretense of wedding expenses.

Wifey and I recently had our 8th wedding anniversary*. We got married before I assumed the moniker of Loonie IT Guy. So how much did we spend on our wedding? What was the combined costs of our receptions? How much did we force our guests and wedding party to spend?

For one, wifey and I registered our marriage at city hall. No ceremony, no dresses, no tuxedo, etc. We did purchase a bag of lucky candy for the official who processed our application. The process took a few hours longer than usual as wifey forget to bring some important documents. Oops. It wasn't a big deal, just had to pay double the bus fare.

The marriage certificate didn't cost very much either. Once the official processed the application, he asked if we wanted to marry each other (obviously, we said yes), and then he declared us married. He was shocked at the bag of candy we gave him (apparently, people just give a few candies or something, if they even give anything). So between the bus fare, the candies, the lunch (we didn't realize how long the bus ride would be, so we stopped for lunch once we realized we needed to go back to retrieve the documents) and the fee for the marriage certificate, the total costs were at most $150.

In terms of celebrations, we held three separate wedding receptions. One for wifey's family and friends (both in China) and one for my family (in Canada).

For wifey's friends, we went to a buffet (back when buffets weren't offensive to our bodies) that cost approximately $28 a person. If I recall, there were 10 of us and wifey and our cost was covered (despite our adamant protests) by wifey's friends. So in the end, each guest paid around $35.

For the reception with wifey's family, her parents covered the cost. We had three tables of ten. With each table costing around $75. Each family gave us red envelopes containing approximately $20. I don't know how many families there were. However, there were no more than 26 guests at our wedding. The families ranged in size. I don't remember how much money was received. However, not a big expense for people to come to celebrate our marriage.

Finally, the reception we held in Canada. This is where the real money was spent. Let's see. My parents insisted on covering the cost of the dinner**. We held it at a restaurant that knew my parents because they knew my grandfather (who was now deceased for almost 5 years at this point). So anyway, because of the familiarity, my parents received a discounted rate of $400 a table. Including taxes and tips. We had three tables, so the final tally was $1,200. Each family gave red envelopes containing $200. With the exception of my aunt and uncle on my mom's side, they gave us $300. While $200 (or even $300) is a lot of money, it's nowhere near the $800 that was spent in the article above.

Essentially, the money we didn't spend on a big crazy wedding and multiple receptions, we used toward a down payment toward our house purchase 3 years later.

It simply doesn't make sense to me that people are willing to go into debt for what essentially is a big reason to party. Debt is already a leading cause for marriages to deteriorate. Why start your marriage off on the wrong foot?

Of course, if you have the money (or your parents money), feel free to do whatever you want.

It still doesn't make sense to me. Even before I started to ramp up my savings.


*Both wifey and I forgot. My parents actually reminded us that it was our anniversary.

**My parents were worried I would be the only one, between my sister and I, to get married. At the time, my sister was against marriage. Six years later, she got married. Of course, she's not having a wedding reception dinner. Long story short, she wanted to have one, but our grandmother forbade it because one of our uncles is currently battling cancer. Grandmother doesn't want the bad aura of the cancer to taint my sister's marriage. Or something to that effect. Even though she was married in October 2015. My sister is a procrastinator. Actually, she also missed the funeral of our great grandmother who passed away a couple of weeks after my sister's wedding***. Chinese superstitions, eh?

***Speaking of weddings, my sister did the same thing. She and her husband were married in Peterborough (husband's mom lives close to there) city hall. Only cost involved was driving. If you count the suits I purchased, then $900. But they weren't fancy suits you can only wear to weddings or funerals. I can use these suits for pretty much anything from job interviews to business meetings.