Back in December, I came across this offer from Fido. Essentially, by agreeing to sign up for a data only plan for 2 years, you can get a free LG tablet.

I thought about it for a couple of days. While I didn't need the data, there were times when I actually did need it. When I was driving and gotten lost or while I was shopping and needed to look up product reviews for something that was on sale.

I asked wifey her thoughts and she thought I needed to get the deal as she felt having data was just as important as having mobile phone service.

Of course, my current phone plan is pretty amazing. For $85 a year (plus $0.75 a month for 911 fees for $94 a year), I get unlimited texting and 100 minutes (per year). As I don't make and receive many calls, the 100 minutes is good enough. Since I do the majority of my correspondences via text, I feel this is the best bang for my buck. As I didn't want to give up such a sweet deal, I debated and debated.

Finally, the straw that broke the camel's back? When I was looking to snap a photo of baby girl doing something awesome and the camera on my phone refused to work. Grrrr...

Time to get a new phone. It never occurred to me that a phone with a reliable camera was important until something like above happens. As I've had my phone for 2 and a half years, I've been satisfied with it for the most part. Anyway, I looked around a settled on a OnePlus 3T. Why? It is a juiced up phone, on a relatively modest budget (more on the phone another time). Yes, $722 total with taxes is a harsh amount to pay. However, it does comes with 2 SIM slots and that would allow me to pick up the data only plan and keep my existing plan.

In addition to that offer, if you picked it up from Best Buy, you'd get a $50 gift card for signing up with a 2 year contract.

The process took about a week. As this deal was amazing, the tablets were essentially sold out. I had to order one online and have it delivered to the store. My fault for waiting a few days to pull the trigger. Anyway, after it arrived in store, I'd need to refund the tablet, and then purchase it again with the 2 year contract to get it for free.

That process took about an hour to set up. After that was complete, I was given the $50 Best Buy gift card (it's still in my wallet) and I walked out of the store with data on my phone, the gift card, and tablet. All that without having to pay for anything. Did I mention I used wifey as a referral at Fido? That's another $50 credit in 90 days ($25 for her and $25 for me!).

So what's the big deal with this plan? For one, data is stupid expensive in Canada. Normally, you only get 1GB for $15 instead of 3GB. If you go over your data allotment for the month, data overages are excruciating. In some cases, $5 for every 100MB. Yikes!

Though I have two SIM cards, it's actually very easy to configure. I set it up so that one SIM does all the data and the other SIM handles all calls and texts. I also asked Fido to block all incoming and outgoing calls and texts on my data only SIM as the charges are crazy if you use a data only SIM for calls or texts. 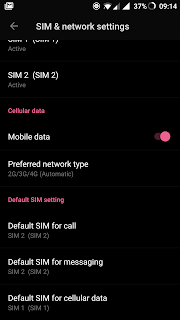 It's approximately $45 a month for the discount carriers on LTE data. Plus, with one discount carrier, in order to access their LTE network, you need to purchase one of two phones as those are the only two phones in existence to be able to access their LTE network. At least for now. Either way, you'll need to get a new phone as the old phones don't support the new frequencies.

As for the tablet, since I didn't need a new tablet (on account of me getting a new phone), I figured I'd give that to my father-in-law. His old tablet (Google Nexus 7) wasn't working that well. He's especially happy with his new tablet. The old tablet he had, I factory reset it and gave it to my mother-in-law. Now it's working like new again. I suppose one app or two on that tablet was causing all the problems before. Mother-in-law loves that she can watch TV shows anywhere as well (as father-in-law) and doesn't have to be tethered to the computer or TV.

Despite spending so much on a phone, seems we also solved a few problems. I now have access to data while I'm out. Father-in-law now has a faster tablet to do his things (games, watching TV, etc.). Mother-in-law can now watch her TV shows anywhere she wants.

Still though, that's a lot of money on a new phone... But I've managed to get a lot of great photos (and videos!) of baby girl. I suppose you can't put a price on that.

Currently, the tablet offer no longer exists. However, the data only plan has recently been extended to the end of January. I suppose there's a chance something better will come along in a few months. That's likely the reason for wanting to lock customers in for 2 years. Either way, still a great deal with the free tablet, $50 gift card from Best Buy, and the $50 Fido credits.
Labels: data-only plan fido LTE oneplus 3t tablets