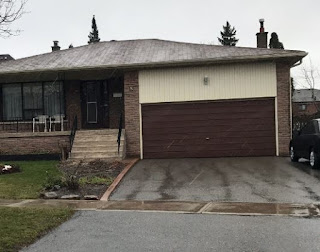 Recently, there have been many stories about housing prices in the GTA. Like this one. Essentially, it tells us the neighbourhoods that are "affordable" I use the term lightly as the average prices listed are staggering.

In Toronto, the top five neighbourhoods to buy are:


In the GTA, the top five neighbourhoods to buy are:


Frankly, if wifey and I were to buy in this market, we wouldn't be able to afford it. Combined with this story from the CBC, it makes sense that there is a lot of buyer's remorse.


Among millennials (individuals between ages 18 and 34), more than a third of them said they already own their own home.

But 81 per cent of them said they planned to sell — and many will do so because they regret buying in the first place.

If our monthly mortgage costs doubled, we'd feel the pinch as well. However, this is the new norm. Buy now while the prices are going up! Really, it makes no sense. As this article details, even if house prices go up, home owners are reluctant to cash in their windfall as it would mean purchasing another house that's inflated. Of course, this is assuming you want to stay in the same area. If you're willing to downsize or move 1 or 2 hours outside of the city, then yes, you will be able to take advantage of the housing prices.

For example, in our area, there's a house similar to ours listed for $952,000. If we were to sell, after paying off the remaining mortgage and assuming 10% to cover fees, that'll leave us with around $550,000. If we want to stay in the neighbourhood, we would be able to afford a townhouse for $500,000 or a condo for $378,000. We would be downsizing quite a bit as these options only come with 2 bedrooms and a den. Currently, we have 3 bedrooms and an office that we're not using in the basement. However, as we haven't really accumulated that much stuff, a downsize is theoretically possible. We may need to sell a couch (or two) and some shelves or something as we currently have 3 couches and I don't think we'd have the room in a smaller place.

If we're willing to commute a little farther, we can get a townhouse or semi in Pickering, Ajax or Whitby for between $450,000 to $550,000. The drive into work would be an extra 20-30 minutes. Grocery shopping wouldn't be as convenient as most of the cheap Chinese supermarkets are in Markham. Sure, you'd still have No Frills and Food Basics out there, but that too would be a longer drive around 10-20 minutes more. Currently, we're only 5 minutes drive away or 15 minutes by bike.

If you are completely insane and want to add 2 hours to the commute, you can get a detached in Georgina for $550,000. My wife's friends did that 18 months ago. That's 4 hours of driving to work each day. Most of the delays on the streets of Toronto and the DVP as they navigate themselves north of the city.

However, as people want to be close to amenities, friends, and family, they want to stay in the same city (or area). As such, this is the reason a lot of young people choose to pay more for house than they can comfortably afford.

There was another story only days before of a woman who was house hunting since 2013. Every time she saw a house, it was either sold in hours or was bidded up. As the prices climbed, she and her husband had to save more for a bigger down payment. It was scary to read, considering wifey and I purchased our house in 2012.

Even renting isn't much of an option these days, with stories of people's rent doubling. There was even a news series of a CBC reporter becoming homeless because her downtown apartment rent increased from $1,600 a month to $2,600 a month. That's just incomprehensible.

Remember our neighbour who inexplicably sold their home in October of last year? They signed a 6-month lease for a detached house for $2,500 a month. That amount is bigger than a lot of people's mortgage!

To sum it up, there's a problem in the GTA. Unless you're willing to move to the middle of nowhere or you're close to retiring and are capable of downsizing, there's not much that can be done.

Sure, it looks great that you're worth half, three quarters or even a million dollars. But you can't eat your house.
Labels: GTA high house prices real estate Toronto