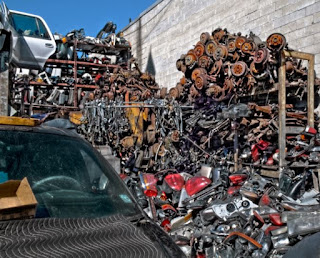 A couple weeks back, while enjoying the sunshine and pretty unseasonably warm spring weather, we noticed one of our neighbours was making an addition to their lot.

Was it a new deck? Some interlock? A fancy stone walkway?

Well, no. It was a shed. While everyone's backyard in this area is pretty small, this neighbour has a corner lot as well. That means there is more room next to the two door garage. Theoretically, if you paved this area, you can park a vehicle here. Though, why you'd need a 3rd car is beyond me. Especially considering we're doing fairly well as a one car household.

On top of this small parcel of land*, the neighbour has erected a garishly looking shed. I mean, it doesn't look that bad. But it's not going to win any awards for subtlety.

It's just there. Taking up space.

Of course, in a structure such of this, there's only one thing you can store inside. Stuff.

Mountains and mountains of stuff.

When I say stuff, I don't mean the stuff that is valuable or the stuff you need once in a while but don't have the space at home to store it. It's just stuff that has no use whatsoever, but you don't want to throw it out because you spent good money on it even though you didn't really need it to begin with. That kind of stuff.

I could only imagine what is being stored in there. Old paint cans? Pieces of wood? Christmas decorations? Old clothing? One could only guess I suppose.

However, as shocking as this may seem, this neighbour isn't the only one with a limited supply of space in their house. Another of our neighbours also has a stuff problem. So much so, they don't park their car in their garage. I kid you not. They are forced to park the car in the mini-driveway between the garage and the laneway. Most days their car is parked out in front of their house as it's not easy to navigate a car as big as theirs in such a tight space and avoid hitting the garage or adding scuff marks to the side of the car.

How much crap do you have stored in your garage that you cannot walk inside your garage?

I've seen the inside of this garage, and to me, it's just a lot of cardboard boxes and a mess of shelves. Nothing appears to be organized in this garage. Just a lot of disorder and overall chaos.

Do you think owning all this stuff makes these people happier? I don't know. It's doubtful. However, I bet they would be happier if they didn't have to think about where they are going to store the next thing they get or what gets bumped to the garage or shed to make room for the next new thing they get.

In the Loonie household, we have half a garage basically empty. I say basically, but father-in-law is using the space to store the top soil he bought, or to grow the frost sensitive plants now that winter weather has returned the past week. Wifey is using the space to store the baby strollers (in-law's friend gave use an extra one because they had too much stuff as well). I'm using it to temporary hold the winter tires until the weather clears up enough for me to give them a good rinse of all the salt residue they've accumulated over this past season. We're also using the garage to store our recycling, compost, and garbage bins so the trash pandas and other critters don't get their paws on these bins and make a big mess.

Inside our house, is more of the same story. We don't have much stuff. Now that we've renovated the basement, some of the furniture has moved downstairs. That has left the room we previously used an a family room fairly empty. There's the TV stand and side table we picked up for free, but aside from those things, there are a lot of plants in that room.

When the in-laws' friends come and visit them, they are shocked at how much room we have in our house despite the fact our house is among the smaller houses (in terms of living space) in our neighbourhood.

This room, in my mind, will be baby girl's playroom. Why assign her the basement when she can play and be creative in a bright and sunny space? There's a reason business people want to work next to a window and it's not to have a post it war with neighbouring offices.

However, if we were to fill up this empty space with more stuff, we'd have no room for baby girl to play. She'd need to stay in her room all the time and that's just plain boring. That's not to say we won't fill up that space. Maybe baby girl will need a bin or shelf to hold her stuff. Maybe mother-in-law will get her way and we'll fill the space with a piano. Either way, at least we have options because it's not filled up with our stuff with extra TVs, couches, or random tables that don't seem to have a purpose except to hold flowerless vases.

In the end, by not buying so much stuff, your bank account is much, much bigger. It's true. Less money spent equals more money elsewhere. I've done the math. It's legit.

The alternative is to increase your income in order to maintain your stuff buying expenditures.

There's also the 3rd option. Owning mountains of stuff and piles of debt as these mountains were purchased on credit, whether it be with a credit card or line of credit. Surely, our neighbours aren't like that, right? Right?