The Folly of Timing the Real Estate Market, Part 2

Last month, I wrote about our neighbours. In short, they were looking to cash out of their house and move further north.

At the time, I assumed they had a mortgage. However, further inquiries by my mother-in-law have revealed this isn't the case. Their house is actually mortgage free!

However, it's not a matter of buying another house after selling their current one. It's actually a very complicated story. So let's get to it.

From what was detailed by the mother-in-law, the neighbours planned to eventually end up in a condo. That's great! Owning a house is a lot of work and the neighbours are getting up there in age.

Unfortunately, it's not so cut and dry. Back in November, they purchased a detached house up north (north of highway 404 apparently) for around $800,000 as an investment. Two years ago, a house in this area was selling for $500,000. It appears the neighbours were lured by the prospect of easy money.

We don't know the size of their mortgage.

In addition to that, by moving to the investment house, they'd need to add 15 minutes to their commute. Based on that information, I think they work somewhere north of where we are. If they worked south (like downtown), the commute would be at least an extra hour or so.

Seriously though. More time to the commute?

I couldn't even imagine a commute longer than what I drive currently. I drive only 22 minutes home from work on a good day. On days with extremely congested traffic, it's 30 minutes.

The only good part of this story is that their current house is mortgage free. That means they are only carrying one mortgage at the moment. Which is a good thing.

Assuming they picked up a 25 year amortization, 5 year term, fixed rate of 2.5% and monthly mortgage payments, that leaves them with an estimated monthly payment of $2,867.

Since they planned to move into their investment house, as it's actually vacant currently, that means they've paid over $28,000 for an empty house... so far. Sure, some of that money is going into their house. However, a good chunk of that is going to their lender.

If they do manage to sell this house and their investment house in the future, they'd need to pay 5% commissions to real estate agents. For $1.6M ($800,000 for the investment house and $80,000 for their current house), that's $80,000. They'd also need to pay the other closing costs of selling their houses. Ontario land transfer taxes, lawyers, land surveys, title insurance, etc. Their investment house would need to increase in price for them to make the venture of selling two houses worth it. With prices stagnating and even declining in the GTA, this is something I don't find likely.

My mother-in-law was very blunt with them. She asked them point blank why didn't they just sell the house and move into a condo?

They danced around the answer. Something, something, investment.

Dance all they want, it comes down to one thing. Greed. They were being greedy. I think that's the likely answer.

Anyway, as of this morning, their house is still listed. It's been 10 weeks now. They've increased the listing price two times now and only recently dropped the price to $858,000.

I didn't think our direct neighbours would be able to sell the house before the neighbours three doors down. I was right.

Now, I don't think our direct neighbours will sell their house unless they accept a price around $788,000.

At least they can afford to wait. It's still going to cost them. However, they are in no rush to sell.

However, it would have been so much easier if they just bought a condo in November and sold their home in February. 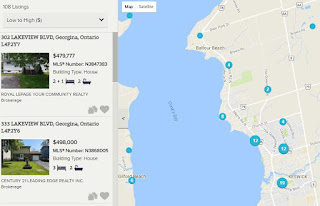