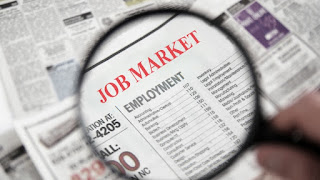 When it rains, it pours. Not only did I recently find new employment, Wifey received an offer for a new job opportunity and she wasn't actually actively looking.

Her friend has been actively recruiting Wifey for a couple years now. The last time she asked, Wifey was locked into her job for some time remaining as a result of receiving a maternity leave top up.

This time around, Wifey wasn't locked in so she sent in a resume at the behest of her friend.

What does this mean for early retirement?

Well, currently Wifey is part of a defined benefit pension at her current workplace. However, she wouldn't have been able to access the money until she was 63! That's mainly due to the fact that she joined her company pretty late in her career and some rules regarding service years or something.

Her new place will have a group RRSP with matching available so that's much better for early retirement as money in RRSP accounts can be accessed at any time. They just will be treated as income for the year they are taken out.

Granted there are probably some things like commuted value and whatever that will be offered when Wifey leaves. However, as I don't have the details, we cannot make plans for that yet. Most likely there will be an offer to take the money out early. However, most of that will be in the form of locked-in RRIF or something like that. Some may be able to be transferred to RRSP if we have room, and some will be offered as cash. However, that will also come with a hefty tax bill. As I said, we don't have all the information so we will need to wait until we get the letter.

However, this new job will also come with higher expenses. Mainly the cost of driving. It's almost 40km one way. That means higher gas costs, wear and tear on the vehicle, and more time spent on the road. Fortunately, I recently found new employment that doesn't require a vehicle so we don't need to get a second car. However, wifey might need to go on the toll highway as the majority of the drive could be done there to save her some time.

Her new salary will mostly cover the cost of the toll highway, but not quite. She received the salary she requested, but that was the number I calculated before she told me she might need to use the toll highway. Unfortunately, she forgot about the second target salary I told her to factor in the increased cost of driving. Either way, it's still a significant salary bump so we'll see what happens.