Net Worth Update for October 2020 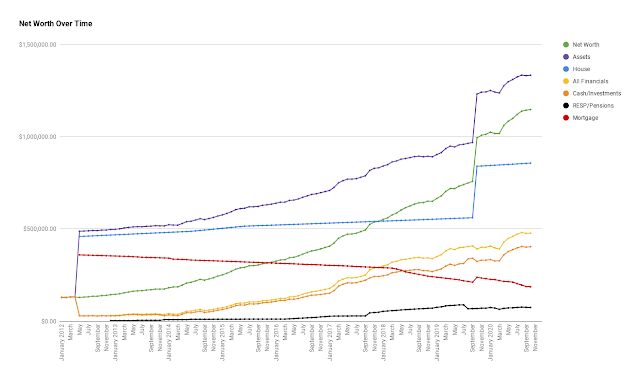 Another 6 months have passed. In all honesty, it feels like years. Ontario is now in the second wave of the COVID-19 pandemic and Toronto has been essentially locked down. To be honest, not much difference. Just stores that sell essentials like grocery stores are allowed to remain open. We haven't really purchased things from elsewhere aside from online shopping.

Our daughter is now in kindergarten so I don't know if I should refer to her as Baby Girl anymore. Maybe just Loonie Girl cause she drives me Loonie at times. With the lockdowns and the fact that the in-laws are in a high risk group if they contracted COVID-19, Loonie Girl is attending virtual kindergarten. Our main concern when she started was her socializing with other kids. However, a few months in and she appears to be interacting with the other kids. Which is good in a way. Better if it was in person, but that cannot be helped given the current climate.
As mentioned previously, Wifey changed jobs again. As a result, we lost her company match funds as they were unvested. We didn't know they were unvested, but whatever. It wouldn't have made a difference as the amount was peanuts compared to the raise she received at her new company.
However, because she changed jobs, our cashflow increased substantially. The new company doesn't have stocks or a group RRSP, so any extra money was put into the mortgage and non-registered investments. Not only did we get our mortgage below $200,000 by the end of October, we smashed that by an extra $14,000!
Stocks also climbed back up before dipping a bit. We were down 20% at one point. Now we are up 3% for the year. As such, we passed the $400,000 mark for our cash/investments. At least the investments that can be taken out. I don't count the LIRA, RESP, or pension money. Still two more months to go, so we'll see what happens then.
Since the new year is around the corner, that means RESP and TFSA contribution room will be available again. Additionally, because Wifey lost her company match, she should get a pension adjustment reversal. We will see if we need to contact someone at her old company if they don't end up sending that out. Anyway, with all those things coming up, we definitely need to save up money for the new year. We've stopped investment into our mortgage and non-registered investments for now.
All in all, our net worth increased by over $86,000 these past six months. We are worth over $1.14 million. Granted most of that is from our condo, but over the past six months, that only increased $9,000. We did pay $29,000(!) into the mortgage, so that definitely helps increase the net worth.
As for the lockdowns, I feel because of that, we're spending more money. Rather than visit 4 grocery stores to get the best deals, we only visit 1 or 2 and get what we need. I've been spending a lot of money buying Ambrosia apples. Loonie Girl and I share one every day. If we don't get them on sale, they cost over $1 for each one. Which is nuts.
We also bought more stuff to keep Loonie Girl occupied. Ideally, she goes outside to play in the playground. But seeing how it's nearly winter and with the number of new cases exploding, we feel it's safer if she stays away from playgrounds. So we got more board games and books to keep her busy.
Don't even bring up Christmas. Though, we buy stuff throughout the year when it goes on sale or something.
Anyway, there was talk of a vaccine coming up.
We'll see what happens in the next 6 months.
The following is a summary of the numbers for the October 2020 update:
Labels: budget debt expenses groceries GTA house investment mortgage net worth personal finance returns shopping Toronto