The Dangers of Running With The Herd 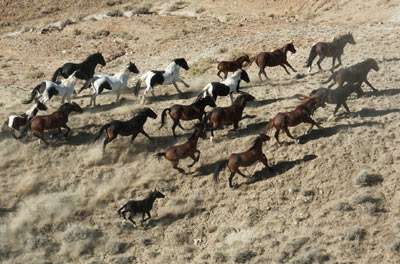 It's been so long that I forgot about it completely.

Here's the back story. Shortly after I met wifey in 2007, the Shanghai Stock Exchange was having a remarkable bull run.

Wifey didn't want to miss out on this opportunity. Most of her co-workers were investing in the stock market and getting richer in the process. Not knowing how to start, she asked me for help.

Of course, this was 7 years before my transformation to become the Loonie IT Guy. As a result, I had no clue where she would start. The only thing I knew about stock market investing was that you're not really making money unless you sell the stocks. Of course, this turned out to be partially true as I didn't understand the concept of dividends and distributions.

Anyway, as I was of no help, she turned to her friends for advice. One of them advised her to buy a mutual fund from her bank and hold onto it long term.

Looking back, the advice wasn't half bad.

As wifey had no savings of any kind, she waited until her next paycheque to purchase mutual funds worth 5,000 RMB*.

Afterwards, she tracked her purchase daily. In less than a month, her 5,000 RMB purchase was now worth an extra 300 RMB!

She was excited. She was also partially regretting her tendency to spend her entire paycheque monthly with no room for savings.

I quickly reminded her that she hadn't made any money yet and wouldn't unless she sold her investments. Of course, the market just kept going up, so she held onto her investments. She wasn't the only one. All her co-workers held on too.

That's when the decline started.

Of course, there was a brief upswing. However, at this time, the global financial crisis had not yet started. No one knew what was going to happen. After this brief upswing, people held onto their investments waiting for the stock market to rise again.

All the gains her co-workers received in 2007 were wiped out in a matter of months. All those fancy lunches didn't seem like a good idea anymore and no one was talking about the stock market anymore.

The last time wifey looked at her portfolio, the value was a shade over 3,000 RMB.

She asked me if she should sell her investments to avoid more losses. Not knowing about dividends and the like, I told her she might as well hold onto her investments since we didn't need the money and things should improve eventually.

Six years or so later, wifey and I remembered she still had money in her investments in her Chinese bank account.

She asked me again if she should sell her investments. As the Loonie IT Guy, I am more than capable of answering her question.

First, I needed to know the fees on her mutual fund. As the site was in Chinese, I couldn't figure it out. Wifey eventually found something that roughly translated to management fees. Turns out she was paying about 1.7% in management fees. Yikes!

I was planning on seeing how the Shanghai Stock Market was doing next, but seeing how high the fees were, I told her to sell right away.

Now that I've had time to look at the historical Shanghai Stock Market data, it appears most of wifey's gains were from distributions into her fund. She wasn't invested in an index fund, but something similar to a large cap company fund.

In any case, the Shanghai Stock Market is still hovering around 2,000 RMB 6 years later. Better to move this money to Canada.

Looking back, it looks like the Shanghai Stock Market had a huge bubble burst. In the lead up to the all time high, investors couldn't pour money into the markets fast enough. Eventually, someone wised up and decided to cash out. That's when everyone else decided they needed to cash out before they lost everything they invested. Wifey got caught up in the madness as well. She didn't sell her investments and those investments still earned her a decent return despite the huge loss up front. She was also fortunate she was living paycheque to paycheque. Not that I would advise that to anyone, but this situation shielded her from greater potential losses.

As for her co-workers, I have no clue if they got out or stayed invested. No one talked about the stock market after the collapse.

It was a sore spot for everyone involved and rightfully so.

*At the time, the exchange rate was probably somewhere around 6.80 RMB for every Canadian Dollar. This 5,000 RMB would be about $735. Doesn't seem like a lot. However, at the time, the average monthly salary where we were was about 2,000 RMB a month. Wifey was pulling in serious dough.