How Warm is Your Home? 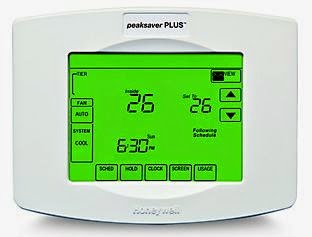 It has been a colder winter this year. With the daytime average for January around -2°C, we've been on a streak of minus double digit temperatures.

Although today's high is -4°C, seems we're getting an arctic blast that will lower temperatures to around -20°C.

With that in mind, how warm is your house?

If you're like most people in Ontario, you have a natural gas furnace to heat your home. That means you use natural gas! I should be a detective.

Despite the increase in the gas rate, our natural gas bill for January 2015 was lower than the one in January 2014!

How is that possible?

Well, last year, my mother-in-law was staying at our house. As a result, during those cold winter days, she didn't go out. Frankly, it was dangerous as sidewalks were infrequently cleared. When sidewalks were cleared, it exposed some ice from the ice storm. We set the temperature in the house for a balmy 19°C. As she was home during the daytime, it was a constant 19°C.

On average, the temperature in our house is 17°C. That's assuming I never remember to turn down the temperature on the weekends. That's two degrees lower than last year.

If the average temperature in people's homes during the winter is around 21°C and we're about 4 degrees below the average, that means there are houses out there blasting away at a heat wave temperature of 25°C or more!

No wonder why some people have natural gas bills over $400 a month during the winter!

As it requires more natural gas to heat your home, and it's not a linear relationship between cost and degrees, there's no way for me to accurately determine how much people would save if they simply lowered their indoor temperature from 25°C to 21°C.

All I can say, is that these households are figuratively burning away their money.