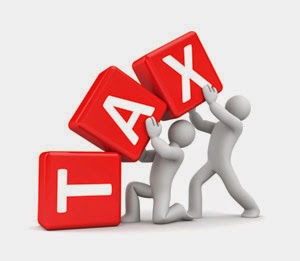 My parents are both retired now. Early retirement for them was 65 and 61. Very surprising, considering the financial mistakes my father made in the last 15 years. It was very fortunate for both of them that my mom didn't make those same mistakes. Also, as a nurse for most of her adult life, she built up her RRSPs and earned a decent pension.

No idea what world my father is living in, though. Over the weekend, he was complaining about them owing the Government over $5,000 in taxes despite being retired.

Frankly, I'm not surprised at the $5,000 in taxes owed. In large part to his past financial indiscretions, my father wiped out his RRSPs to partially pay down a huge debt. Yikes! From my understanding*, the only money he's "earning" is the money from Old Age Security (OAS) and from the Canada Pension Plan (CPP). Let's assume that's $16,000 a year and he's being appropriately taxed for this small amount (Approximately, $500 in taxes).

In order for my parents to be receiving a tax bill of $5,000, I'm going to assume the following:

To avoid the taxes associated with the forced withdrawals of the RRIF, she has started to withdraw from her RRSPs.

We all know RRSPs. You put money into them and the Government gives you a tax refund! Awesome! Additionally, money grows inside an RRSP without being taxed! The only thing people forget, is that the Government isn't that generous. RRSPs are only tax deferred. The Government is patiently waiting for their share.

So obviously, you'd take money out in increments of $5,000 right? That way you avoid paying 30% tax! Right?

Sadly, the Government has a way of getting this money.

Any amounts taken out of your RRSP is considered as income the year you withdraw the money. If you withdraw $5,000 from your account 8 times, your income from RRSPs is $40,000.

So why do they consider it income?

Well, when you put the money into an RRSP, you're deferring your income to be taxed later. You are receiving the tax refund because you are effectively lowering the amount you earned the previous year. Since the Government taxed you on the amount you didn't earn, they give you money back in the form of a tax refund. It's not free money!

This is my best guess:

This seems plausible to me.

So how could they have avoiding this tax bill?

For one, my father's financial mistakes forced my parents to work longer than they wanted to. Without this mistake, both my parents could have retired earlier giving them more time to withdraw from their RRSPs before the age of 72.

That means they wouldn't need to take as much money from their RRSPs each year. However, let's just assume they need the $71,000 of income per year.

Either way, the Government is going to get its share. However, with sound financial planning, you can keep more of that money in your pockets.

*My parents don't share much of the details with me. I have to guess in an attempt to figure these things out on my own.