Do You Own Stuff Or Does Stuff Own You? 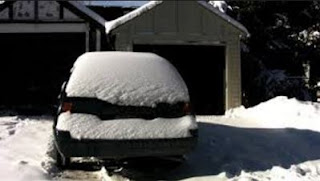 So yesterday evening, we were hit with the biggest snowstorm of the season. Approximately, 25 centimetres of snow fell last night. That left a lot of people digging out this morning, myself included.

I continued shovelling and glanced around the area. About half of the houses on my street had cars in the driveway. This is despite having a two car garage. Okay. Some aren't as fortunate since they have a one car garage. However, the next thought in my head.

How much stuff do you have that you're, essentially, forced to park your car on the driveway?

As you know, wifey and I recently sold our second car. Now we have a lot of room in the garage. Despite that, the space has remained empty and void of any new and old possessions. Looking around the garage, I have a push reel lawn mower, wifey's and my bicycle, some soil from the previous spring and summer, some grass seed, and a bunch of sticks.

We also use the garage to store our garbage can, green compost bin (to prevent easy access for raccoons), and a blue recycle bin.

Even with a basement renovation slated to get underway, none of the contents from our basement have migrated their way to the garage. The garage has remained untouched.

Now, I'm a bit of a nosy parker. I try not to be, but I have a keen eye for small details that a lot of other people seem to glance over.

When walking or riding by these neighbours with their garage door open, you can see which families have a lot of stuff. Plastic bins and containers of clothing or mementos piled up and far as I could see. Shelving with boxes and boxes of tools and building accessories. On the rare occasion, the garage would be full with two cars PLUS a car in the driveway. Three cars?!

This stuff also isn't piled neatly either. Across the street, our neighbour has a garage that is so messy, I've never seen anyone enter it in the four years I've lived in the neighbourhood! Although, I suspect they used to live in Scarborough as they have a rare grey recycle bin for paper that originates from there (details). That's the worst case. Having stuff that you really don't have access to. Is it really your stuff now if you don't use it?

I admit, I was in the collection stage of life in my early 20s. I have a lot of books, electronics (and the cables that come with it), cards (trading card games, hockey, playing cards, etc), and CDs/DVDs. Yikes. Fortunately, I stopped collecting these things in 2005. One day, I just decided I'd set a goal to save $5,000 in my bank account. I'd still go out with friends and coworkers, but after a year and a bit, I finally made it. Of course, in 2007 my parents were forced to sell their house and move into an apartment, so space was a premium. I couldn't help them with taking it away as I was abroad at the time. They were happy when I cleared out my stuff in 2011.

Now, I'm not fond of buying stuff I don't need. The rare occasion, I will buy something like socks or shirts because they are really cheap or I really need them (old ones are starting to break or have holes, etc.). For the most part, I don't value stuff. I get more satisfaction doing than having. If that makes sense.

By the time I finished shovelling, I was able to hop into my car and drive to work. I saw a lot of people forced to move their cars out of the driveway (and onto the street in some cases) after brushing off the snow in order to start shovelling the driveway.

Not the best way to start your day.