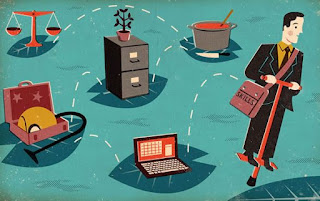 Changing jobs. It's both exciting and scary if you think about it. Whether by choice or out of our hands, it's something that happens to most people at least once in their lifetime.

Gone are the days when you start AND finish your working career at one company.

However, depending on when you change your job, you may actually be leaving thousands of dollars on the table.

Wifey recently changed companies. She now has a commute that is a few minutes shorter. However, she needs to drive to work. Fortunately for us, she's heading in the same direction as me, so we carpool*.

Aside from the commute, the new job comes with a considerable pay package and a generous defined benefit pension**. Wow! It was essentially a no brainer.


Well, 3 kms isn't a huge con. However, it is still a con nonetheless.

Well, her old company offered a sort of profit sharing bonus. Each year, they give their employees a % of their previous year's salary. As last year was an extremely good year for her old company, the employees each received a bonus. However, you only received the bonus if you remained employed by the company on February 28, 2016. If you leave before that date, you don't get your 2015 bonus. Which is silly to me, but I don't make the rules. As wifey was in the middle of the interview process with her new company in February, I told her that it would be better to wait until after February 28, 2016 to hand in her two weeks notice if it came to that. Fortunately, the new company took a few weeks to get the interviews out of the way and to make a final decision. She was offered the new position in March, so we didn't have to work around the rule imposed to receive the bonus.

That bonus is as good as ours. It'll be placed into wifey's RRSP so it won't be counted as income.***

If she had left her company back in early November 2015, she would have left additional money on the table. I believe it was $2,640. This money was unvested and a part of the Deferred Profit Sharing Plan (DPSP). Seems there is a 2 year period from when you start until when the money in your DPSP is vested 100%. Of course, this money comes from the profit sharing bonus. As wifey's first year was 5-6 weeks, her first profit sharing bonus was tiny. However, her second bonus was quite large, so a portion of that remained unvested until she served a full two years with the company.

Some companies don't offer full vesting until after 5 years. Some don't even allow you to vest a percentage of your savings. I guess they don't want you to skip out on them until they've made use of you. Perhaps they also wanted to get you used to the routine so it makes it unlikely you'd want to leave. Whatever.

In short, wifey would have left almost $10,000 on the table if she left her old company in early-November 2015. That's a lot of free money. Though, at the time, she didn't have anything else lined up, and wasn't really actively searching for new opportunities.

However, if you're considering changing jobs, ensure that you're not leaving any free money behind.

Sometimes it's worth it to tough it out another few weeks or a month before you leave to take full advantage of what companies are giving you free.

*Believe it or not, she works 3 km farther than I do. Crazy fortunate for us.

**This defined benefit pension plan will make wifey exempt from the controversial Ontario Retirement Pension Plan (ORPP). Seems contributions won't start until 2017 anyway, but now we'll have one less person paying into it.

***Usually, this money triggers a pension adjustment for the next tax year. This pension adjustment lowers the available RRSP contribution room. This time, instead of getting a PA, we'll just be putting the money into the RRSP which is the same thing except a PA is consider BEFORE taxes and RRSP contributions are AFTER-TAX money. This will trigger a tax refund. The only main difference.