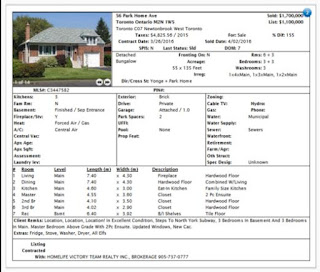 This morning I saw a post about the price of a house that recently sold in Toronto. This house was far from the downtown core, but relatively close to Yonge St and the TTC subway.

What?! One point seven million dollars?!?!!1

I showed some friends this listing and we got to talking about the crazy increases all over the GTA. My house, for example, has increased by 66% in the last four years.

We discussed it further and one of my friends brought up the possibility of selling the house and moving further away and into a cheaper house.

The idea has crossed my mind, but there are some things to consider.

1. Moving further away would mean a longer commute. A longer commute would likely lead to higher gas costs and increase in insurance premiums. Also, it would lead to more wear and tear on the car. That would mean higher maintenance costs.

2. Moving further away would mean moving away from the cheaper grocery stores that are relatively close to our house. Approximately 15km or so. Sure it's a longer drive, but groceries only cost us $500 a month for a family of four adults.

3. Moving away from our community, there would be less Chinese people for the in-laws to interact with. This seems like a non-issue, but their ability to stay in Canada would help us with day care costs in the sense that they could be eliminated. When my in-laws went back to China last year, one of their friends also left because she was feeling alone*. As a result, that left their family without someone to take care of the kids. This family ended up paying for daycare. In the end, they decided it wasn't financially and emotionally worth it for both parents to work and use one salary to pay for daycare than it was for one parent to work and the other to stay at home taking care of the kids.

There are pros though to such a move.

1. Little to no mortgage! That's a huge plus. That frees up some money (after additional expenses) for investing.

That's all I got.

Taking some hypothetical numbers. Let's assume house prices doubled in those 4 years. Assuming the house is worth $800,000 and mortgage amount of $300,000. If you sell the house for the full $800,000 and pay off the remaining mortgage, let's assume $400,000 cash after commissions and fees. For $480,000, we can get a house in Whitby which is about 35km away from work (compared to the current 16km for Markham). We'd need to take on a mortgage of $80,000. Assuming the same interest rate of 2.7%, a 5 year amortization, and accelerated weekly payments, that's $357 a week. The mortgage would be paid off by then and we'd be free to invest the rest.

This is also assuming we take on the mortgage of $80,000. We could take the money out of our investments to cover the $80,000. We'd lose out on compounding interest but we'd also have no interest paid to the lender (approximately $5,000).

Our current weekly mortgage payments are $361. So we'd save $4 a week. Of course, after five years we'll have the full $361 a week extra to invest.

There's also the increase in insurance premiums. Let's assume $10 a month or about $2.50 a week.

Wear and tear, that's tougher to determine. But let's also assume TRIPLE our current car maintenance costs. Triple for the exponential increase to wear as you drive more. In 2015 we spent $300 on car maintenance. That's an extra $600 a year or $11.50 a week until we retire.

My friend lives in the same area (it's how I got some of these numbers), and he tells me that his food costs for a family of four (two adults and two children) are about $650 a month. Assuming we've been getting great deals at the Chinese Supermarket and now we're no longer visiting them, let's assume this amount and increase this by 33% to reflect the fact that we're a family of 4 adults.... or $865 a month. Ouch. Currently, we're spending $500 a month on food. That's an increase of $7 a week.

Seems like it's a good decision to move actually.

Well, that's until you get to the daycare situation. Currently, wifey and I don't have kids. That's not an issue. However, assuming we move, in-laws go back to China, and two kids with daycare costs of $2,000... a month!... (No joke! It's expensive in the GTA. Limited supply and high demand for daycare spots will do that), then that's an extra $24,000 a year!

Hmmm... it's not really as simple as this. There are a lot of variables and unknowns.

The main draw is living mortgage free within 5 years or less.

Now you can completely ignore commuting costs. You can ignore day care. You can even forget about the increase to the insurance premiums and car maintenance.

So really, if your house value has shot up to the point that you'll have a lot of cash, then congratulations! You're pretty much able to retire now!

Otherwise, you've got to weigh the pros and cons.

*My in-laws have a lot of friends in Canada. Not sure why this particular friend only has my in-laws as her only friends. Maybe it's because she's too busy taking care of her grand kids.

**Assuming a safe withdrawal rate of 4%.