Cashing Out Money: Consider All Rules and Restrictions 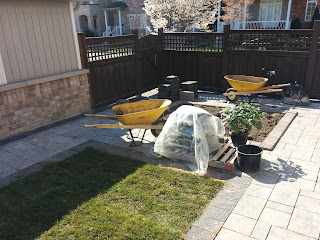 After the colder start to spring we were used to, it was a relief when the warmer weather finally arrived.

Well, at least for my father-in-law, the avid home gardener.

This year, father-in-law was itching at the bit to start gardening. However, there were plans to landscape our backyard to give father-in-law two dedicated areas to grow vegetables.

As mother-in-law gave us a lot of money to renovate the basement, wifey thought it was better if we paid for the landscaping out of our own pocket. This, I had no issues with.

The problem was that they wanted to start landscaping this year!

I assumed we'd wait a year before starting the landscaping. I guess not. Before I knew it, father-in-law procured a few quotes and actually accepted one for $8,000!

That was fast. I had it all planned out. I assumed the renovation would cost us around $10,000. As a result, we'd need to set aside almost $850 a month to pay for the landscaping. Unfortunately for me, we didn't have time for savings.

With the deal signed and a deposit required on a Sunday afternoon, it was fortunate we had a stash of cash at home.

What about cheque? Well, seems this company doesn't deal in cheques. Probably why the landscaping only cost $8,000... Hmmm... Anyway...

That left the remainder. Wifey just received her profit sharing award from her previous company. However, had I known we'd need the money, I wouldn't have deposited it into wifey's RRSP at Questrade. That left me with a few choices of where to transfer the money from.

The first account that came to mind was wifey's TD e-series TFSA account. The benefit for taking the money out from this account was that there isn't any fees when selling. The problem is that we have the account linked to an older bank account my wife uses. To transfer out of that account, we'd need to either write a cheque to another account and wait for it to clear after 5 business days, or transfer it to another another via ETF before transferring it again via another ETF. It's strange. You can't just transfer money freely to whatever account you want. It has to be a linked account and not all banks allow you to link accounts.

The alternative would be to sell some ETFs from wifey's or my Questrade TFSA account. The benefit to this was that we could specify the account we could deposit the money to as long as there was a void cheque provided. The downside was the fees associated with selling the ETFs and the fact it would take up to 3 business days for the sale of the ETFs to close and the money in would be in the account and available to transfer.

I chose the Questrade ETF option as I was planning on scaling back our investment in the VCN Vanguard ETF. When the money cleared in our Questrade account, I sent it along via EFT to our Scotiabank account. Two days later, it arrived.

Regardless, we took out what we could and returned other days to take out the rest.

Why not take the money out from the machine? Well, seems the limit for that is $400 a day. What? Also, this is my favourite part, each withdrawal would count as one transaction. By using a big 5 bank, we probably get 5 or 10 free transactions. I think each subsequent transactions costs us $3 each!

The in-laws had no idea it would be such a hassle to take money out from the bank in Canada. They were used to being able to take out as much money from the bank as they want as long as the money was in their account.

Well, that's what happens when the big 5 banks pretty much control everything. You wonder why people don't like banks?

In short, if you need a lot of cash right away and don't have it on hand, then you're pretty much out of luck.

You need to know how long each step will take and whether or not to expect any holds. Finally, you also need to know the withdrawal rules. So many things to consider when you need to transfer money.