The Real Cost of "Free" Tickets 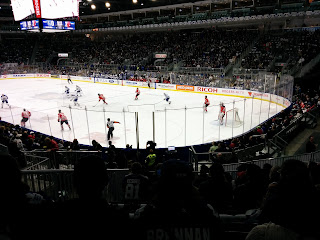 Around a month ago, there was an offer from Maple Leafs Sports and Entertainment (MLSE) for free playoff tickets to watch the Toronto Maple Leafs farm team, Toronto Marlies, play in the first round.

Considering tickets to watch the Toronto Maple Leafs are exorbitantly high and coupled with the fact wifey and the in-laws have never watched a hockey game live, it seemed to be a great opportunity.

I did some research on the site and found that prices of each ticket sells for $34. For four tickets, that's $136!

Of course, since the schedule wasn't yet known at the time, I picked game three. I figured if the Marlies were to lose one game, they'd come back home. Unfortunately for me, they list game three as in the 3rd home game of the series. Which meant game 5! The Marlies swept the first round. So depending on your perspective, it was either fortunate or unfortunate. No big deal, I thought. Nothing lost. I moved on.

A week later, MLSE offered tickets for free for the second round. I think because they only played one game at home during the first round, so fans didn't take advantage of the free offer the first time around. I was quick to snap up tickets. I selected the 3rd home game, which meant game 6 of the series, as it was on a Saturday. I figured it would be easier to travel to the game on a Saturday.

During the first few games of the series, I was keeping an eye on the Marlies' progress. When they were down 2-1 at the start of game 4, I told wifey that if they were to win that game, we'd be going to see them play for game 6. Fortunately, for us, they won! So now we needed to plan the trip.

There were a few options we were mulling over. The first one was driving to the game directly. As my sister lives next to Ricoh Coliseum, that would mean free parking. However, the drive would be long and what we save on parking would be used on gas and wear and tear for the car. We'd also risk an accident, because let's face it, Toronto drivers are bad. The second option was to drive to a TTC commuter lot, buy two TTC Day Passes and ride the Rocket (public transit). The cost for this would be gas, wear and tear, and two day passes. However, gas and wear and tear would be considerably less compared to the drive downtown. Actually, technically, it's past downtown on the west side. So even further. The cost of two day passes would also be $24. However, it would give the four of us unlimited travel on all TTC routes which would give us more mobility and freedom to travel around the downtown core without having to worry about parking.

The decision was made easier for us when they announced one of the highways in Toronto would be closed during the weekend for maintenance. That would mean more gas (idling in traffic) and more wear and tear (stop and go traffic) if we drove. So we decided to take the TTC.

Another advantage of the TTC was free parking on the weekends. Just pull into any of the lots, park, and enter the station. Very simple. Sure the drive there was still 30 minutes! But, driving four of us to the station was much cheaper than paying $32 to take public transit into Toronto from Markham (not including the TTC Day Passes we'd need to buy to allow unlimited travel within the TTC). It's confusing, but there are different transit systems operating in the GTA. That means you need to pay a separate fare for each of them. Bleh.

Anyway, the decision was solidified when wifey's friends wanted to have a gathering that same day! Sweet. She would be able to take one of the passes to meet her friends and the in-laws and I could further explore the city. We drove to the TTC station and bought our day passes. $24.

Of course, before her gathering, we needed to eat. It was very early when we left home, so food was a requirement. We could have brought our own food, but it's been a long time since I had pizza at The Big Slice. As you can imagine, this place has big pizza slices. With costs going up, the cost of each slice was about $5. The second cost of the "free" tickets. $20.

We brought water with us, but I think wifey felt bad as her parents didn't bring anything. As a result, we stopped at McDonald's to buy a couple $1 drinks. $2.10.

Wifey went to her gathering while the in-laws and I walked to a greenhouse to look at exotic plants. Sounds boring, but it was free and actually pretty interesting. As I've never been to this place before, it was new for me. Wifey on the other hand spent $9 on some sort of milkshake. Originally, she didn't plan on spending any money, but felt bad as the waiter kept coming back asking if she wanted anything. Doesn't help that the gathering was in one of Toronto's expensive neighbourhoods. Seriously, $9 for a milkshake? Anyway, add that to the tally. $9.

It was time to see the game. As such, we needed to travel to the arena with our passes. That took a while as the streetcars weren't operating. I guess there was some maintenance or something. As a result, the shuttle bus that took us to the arena was delayed (running on the streets with all the cars as the highway was shut down too). We ended up missing the anthems and the puck drop.

Before we entered the arena, they were checking purses. I did my research at home. They didn't allow outside food or drink. This is under the guise of safety and security. Since clear liquids in a plastic bottle can be dangerous substances. Really, the reason is profit. Water at the arena was $2. Beer in a small plastic cup was $5. Yikes! As I mentioned before, wifey and I brought our own water. However, we brought it in our own reusable container. By the time we arrived at the arena, we were finished our water and only had an empty bottle with us. They checked to make sure it was empty before allowing us to proceed. What's the use of an empty water bottle? Well, as I mentioned before, I did my research. There is one water fountain in the arena. Fortunately, it was also filtered water. I filled up the bottle during the 2nd intermission. We didn't purchase any overpriced food or drink at the arena. However, if we were like everyone else, we'd have spent much more than the actual cost of the tickets. Well, maybe not that high. But maybe spent $50 for the four of us. In this case, the cost was nothing. $0!

Unfortunately, the Marlies lost this game 4-1 (they ended up winning game 7, so no big deal for the Marlies in hindsight). Mother-in-law was really into the game. They even gave us free towels to wave around.

Since we had the day pass and we were downtown(-ish), the in-laws wanted to visit their friends. Seems their friends recently opened up a herbal shop in Chinatown. It took us a while to get there (on one of the new Toronto streetcars no less!), but it was fine. The trip was paid for and we needed to get some dinner to eat.

Since it was a herbal shop, wifey and I spotted some Chinese herbal tea we use to help us get over colds. We were running low, so we bought a box. There was some argument over the price (their friends wanted us to take the box no charge, in-laws insisted we pay for the box). In the end, we paid the sticker price. $4.

Afterwards, we set out to find a place to eat dinner. As it was Chinatown, there were no shortages of places. We settled on a restaurant that my parents took my in-laws to over a year ago. The total after taxes and tips came out to $31. Yes, only $31. It is Chinatown after all.

After that, we went back to the TTC station where we parked our car and went home.

However, ignoring the fact that we could have just stayed at home, we did get a lot of things done.

Sure, it was $90, but it could have been much more. If we drove in, we'd have to find parking for all those places we visited. At least two parking spots. On weekends, that's probably $30. If we drove, we'd probably need at least half a tank of gas. That's about $22-25 depending on gas prices. If we were forced to buy concessions at the hockey game, that would have been at least $50. More if the in-laws wanted beer or something. Easily, we could have spent much more than $150!

However, for $90, everyone had a great time. It's hard to put a monetary value on experiences.