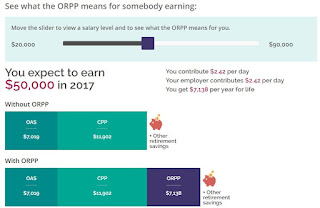 Before the ORPP launches in 2017, the Ontario Government is already scrapping the pension plan in favour of CPP reform.

Thank goodness for that.

Essentially, we'll be paying a little more into our CPP starting in 2019 and we could potentially be getting an extra 33% of CPP money.

Now, I'm okay with CPP reform. Granted, the extra money wifey and I would be forced to put away is now going to this pension instead. However, this option is still preferable compared to the ORPP.

The way the wording of the ORPP was described made it sound like a slush fund for the Ontario Government. That was one of my concerns. Some of the early literature regarding the ORPP promoted the fact that the money in the fund would be used to "invest in Ontario infrastructure". What, that's not an investment. That sounds like we're paying to build highways and bridges. How does that generate an investment return? No idea. No clue how the Government would pay out the pension. I suppose that was a problem for a future Government.

Another concern was the fact that wifey and I wouldn't be able to access the money until much much later and when we could, we wouldn't be getting much since we plan to retire early. If we contribute for 10 years, so that's not much money when we're in our 60s and 70s. If instead we're able to invest on our own, we'll be able to build up our nest egg sooner.

Finally, my last concern for the ORPP was the fact that there would be more red-tape. Now you have to deal with another level of Government just to get the money you're entitled to. With CPP reform, you just deal with one level. Plus since I've been paying into for a long time now, I should be getting more than a small sum.

How much would I be getting? Well, fortunately, there is a way to find out based on all your contributions up to now. First you need to register for an account at Service Canada. They will send you a pin to confirm your mailing address. Then you log in with a sign-in partner (Tangerine is one), and click on the link that says "View my estimated monthly CPP benefits"

There you will see a breakdown of what you can potentially earn if you start taking the pension at 60, 65, or 70. You will also see many other breakdowns like survivor benefits and disability benefits. Overall, a good site to see what you are eligible to receive.

So where does wifey and I stack up? Well, our goal is to retire early. So we'll likely get a smaller pension from CPP. However, we'd likely get 60-70% of the maximum when we apply. If we wait until we're 70, we can get a higher monthly total. I'm not sure if they are assuming the same level of investment or based on contributions up to date. I'd imagine it was based solely on contributions up to date. Overall, it's bonus money as early retirees won't really be able to take this money until they are 60. Wifey and I should be retired long before that.

So ORPP, it was nice to know you. But we don't need you anymore.