Picking Up Stuff For Baby On The Cheap 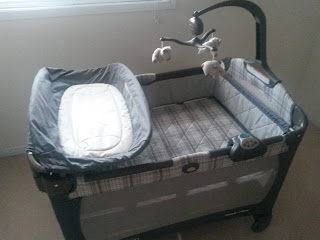 Now that baby is growing bigger and bigger (and getting more feisty) each day, we need to start planning and looking for baby gear.

One of the most common things I've heard from everyone is that babies are expensive. I don't see why. Sure you'll incur some expenses (extra food, diapers (cloth or disposable), but there are others that really don't have to be taken on.

Wifey and I discussed it and we decided we didn't want baby sleeping in the same bed as us. Frankly, I don't see how people could do it. I'd be worried half the night that I would crush the baby. I've kicked duvets and stuff off the bed before. I certainly wouldn't do that to our baby.

So after some in-depth research, we settled on a Graco Pack 'N Play playpen with full sized bassinet. Of course, seeing as the baby isn't due until October, we figured we can buy one in September. Researching prices online for a basic playpen with full size bassinet, you should expect to spend at least $127 + tax. Anything more fancy, and expect to spend much, much more.

Of course, seeing how we're not ones to spend money willy nilly, I figured I'd take a look on Kijiji and see what I could find. Not surprisingly, there are quite a few Graco Pack 'N Plays available.

I browsed for a bit and found a few that looked to be in pretty good condition and were being offered at a decent price. I messaged a few sellers to see what options were available on their playpens as the descriptions and pictures were lacking. Some weren't exactly what we were looking for.

However, that same afternoon, a new listing came up. It contained everything we were looking for PLUS it contained a mobile, add on changer, and night light/music/vibration electronic box. Wow! The couple who listed this was asking for $85. I asked wifey her thoughts and she suggested I ask if they were willing to go down to $65. I was weary. But I did so anyway.

The couple responded that $65 was too low. No surprise. Most people who pay full price for something are reluctant to part with it for a price much, much lower than they paid. Since we were planning on buying a playpen in September, I thanked the couple for their time and let them know if they changed their mind to let me know.

Wifey and I continued to browse the online stores to see what was the going price. All the prices were around $140 or so. Toys R Us seemed to have a pretty big selection so we took a look in person to see how sturdy these playpens were. After taking a look, wifey was convinced this was what we should get.

Approximately three days later, the Kijiji couple messaged me back. They were wondering if I was still interested. I went back to their listing. It doesn't appear many people were looking at their listing. I think the lack of interest and the need to turn something they don't need into cash was more important than waiting for an $85 offer. Of course, they didn't want to part with the playpen for $65, and asked if we were willing to go up to $75.

Since they were willing to drop the price, it was only fair to meet in the middle. We arranged for a date to meet. I asked about the battery that was required for the electronic unit (one size D) and that was it.

When the day came, we met at their house. We looked at the playpen and it was in really good shape. Pictures don't do it justice. Especially, the dark pictures the couple posted. It had everything we wanted and more. We asked the couple to show us how to assemble and disassemble the unit and they gladly showed it (we tried it at home and it was a piece of cake!). Their daughter even showed us that the mobile actually moves and plays music! Wow! Even better.

To close the deal, I handed the $75 to the daughter (she appeared to be the one in charge) and we walked out with a playpen.

Mother-in-law was impressed. She wondered why we paid so much for it (she was thinking something like this was worth $50), until we showed her all the features. Afterwards, she was doubly impressed. She wanted to wash everything, but the playpen appeared to have come with a clean family (their house was spotless), so we convinced her only a wipe down and some time in the sun should suffice.

After moving the playpen into the spare bedroom (I suppose it's not going to be a spare bedroom soon), I decided to look and see how much something like this is selling for brand new. It never really occurred to me before as we were only looking at the models with the features we wanted. No surprise, but this particular model was discontinued. However, equivalent models with similar features were selling for $260 + tax! Yikes! One place had a sale on, but that was still $210 + tax.

Overall, I think we did pretty well with our purchase. The best part, if we take good care of this playpen, we can probably list it back on Kijiji and get some of the money back.