Benefiting From Signing Up With No Contracts

Wifey has been with Fido mobile for the last 3 and a half years on a decent phone plan. At the time she signed up, the price of the plan was $39 for 400 minutes, unlimited SMS, and 400 MB of data. Yes, only 400MB of data. But, it was LTE. When we switched providers, we were porting her number from Wind (now Freedom) Mobile as their service was spotty at best. Since she brought over her brand new Google Nexus 5 (that we bought from the Google Store), we didn't need to sign a new term contract and instead were considered a month to month customer. In addition to that, because we were bringing our own device (BYOD), she would also get a 10% discount on her plan. Instead of paying $39 + tax, wifey would be paying $35.10 + tax. Not the best deal in the world, but better than the shoddy service she was getting with Wind (we were paying $30 + tax a month for no calls, no SMS, and no 3G data). Supposedly, this discount was to be applied indefinitely until she changed plans or something. However, last month when looking at wifey's invoice from Fido, I noticed this little tidbit.

Essentially, Fido was cancelling the 10% discount because they wanted to gouge us that extra $3.90. Wifey could have stayed with Fido and continued along with her plan and paid the extra $3.90 (+ tax) a month. However, out of principle, we decided to leave Fido.

Since wifey didn't have a 2 year term, she was free to move her mobile number to another company.

So why sign a 2-year contract that locks you into a mobile phone plan?

Well, most people aren't able to spend money upfront for a new mobile phone. The 2 year contract usually offers a new phone free or at a heavy discount. However, that usually results in being pigeonholed into one of the more expensive plans*.

Want the brand new iPhone but don't have $919 to spend? 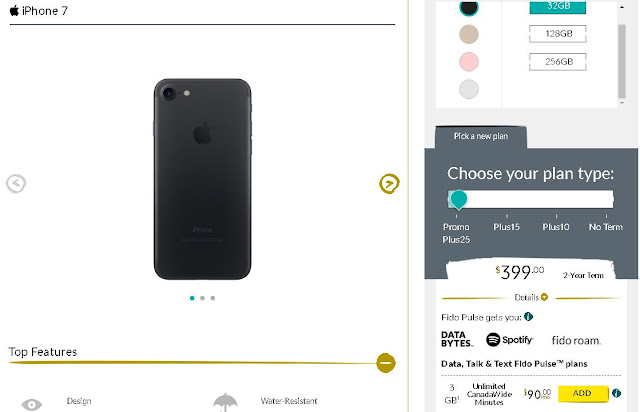 However, for things like honouring a mobile phone plan, the big three is actually pretty good with that.

I know people who are grandfathered with old unlimited data plans from Rogers and Bell and their service has been the same for years. This despite the original contract ending long ago.

Personally, I'm still on a $85 a year prepaid plan that is no longer offered by Fido. Wifey's original plan wouldn't have changed either. Only her discount was being removed and I suppose it was considered a separate entity from her phone plan.

However, I wish I could say the same for TV and internet services.

A quick search online and you can see that the big three (and their subsidiaries) are known to lock you into contracts and change the terms midway through. Ouch!

The biggest snafu I saw was a deal for Rogers internet. Originally, they were offering something like $60 for unlimited internet on a 2-year term on one of their speeds. After 6 months, they increased the price by $5. Unfortunately, for the new users, this wasn't considered a breach of contract as Rogers had a clause stating that they could increase the price at any time. In this case, it was their annual increase and it affected all users.

A quick Google search, and you'll find examples of this among all three companies. In order to stay with your current per month price as per the contract, you'll need to call in and fight for it. In most cases, if you do manage to successfully fight to stay with your lower rate, you may receive a downgrade in service. Not fair to say the least, but what else are you going to do? Leave? Unfortunately, for most people, you're locked into a contract. That means you need to pay penalties to leave.

For most people, calling in (again and again and again), is not worth the hassle of $5 (or $10 if both internet and cable rates go up). For others, they can't afford to cancel their contract and pay the penalties to leave.

However, for those without a contract, you have no such restrictions and are free to take your business elsewhere.

In wifey's case, we ported her number over to Zoomer Wireless. They run on the Rogers LTE network, so the service level is the same. We signed her up for their $36 a month plan that offers her more data, but less minutes. However, after 6 months, she could sign up for their loyalty plans. This is assuming they still carry them after 6 months.

When we signed up, they had a promotion to double up her data and minutes and send her a new phone** if she signed up for a 2-year term.


*Not all the time, though. I signed up for this deal with a 2 year term in December. The prevalent theory among those who discussed the deal on RedFlagDeals is that Fido was expecting the price of data to drop and wanted to lock in customers for two years. Of course, 8 months later, Bell and Rogers increased the price of data overages to $70 per GB (or $7 per 100MB). Additionally, Fido is now offering the $15/month plan but with only 2GB instead of 3GB. Although, some people are reporting being able to sign up for the 3GB plan still.

**Wifey didn't need the new phone. Her Nexus 5 is still working. Also, the free phones weren't as powerful compared to her Nexus 5, which is kind of funny considering we bought it 3 and a half years ago.
Labels: contracts fido LTE mobile phone Toronto zoomer wireless