The Ridiculousness of Assigning Blame 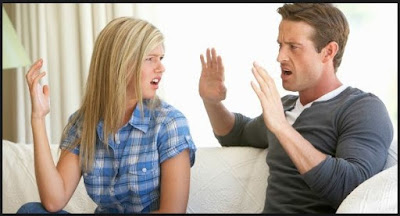 As Baby Girl (BG) and her friend hang out more often, Wifey and I are getting some insight into our neighbours', whom I've givens the pseudonyms Sam and Diane in a previous post, seemingly strained relationship.

One thing I've noticed, Sam and Diane blame each other for many things.

I was speaking with Sam the other day as he brought his son over to play with BG. We were talking about the sleeping arrangement in each of our families as a result of the birth of our little ones. Sam blames Diane for wasting $400 on buying a crib they never used.

Seems the only way to get his son to sleep after they took him home from the hospital was to breastfeed him. That meant co-sleeping. As Sam feared rolling over their son in the middle of the night, he sleeps in the guest room. Over two years later, this sleeping arrangement continues.

I tried to point out that as first time parents, it was hard to predict how our little ones would sleep at night. For BG, as we didn't want to co-sleep either, we tried a playpen and a baby box before we settled on a mattress on the floor. The mattress on the floor worked so well, we purchased BG a new mattress as the old mattress wasn't feeling comfortable for Wifey. While Wifey will lie and breastfeed BG to sleep, she would also sneak out of BG's mattress and sleep on our bed. Assuming Wifey doesn't pass out as well. So far, this arrangement works for us. On the rare occasion, BG wanted to sleep on the 'big bed', but that was once and she didn't make it a nightly habit.

Nevertheless, Sam lamented the loss of the $400.

When I'm with Diane, she would blame Sam for where they are currently settled. Not that their house is bad. More like their current country. When they first got married, with Diane being European, she wanted to settle in Germany. However, as Sam was born in Canada and his entire family is in Canada, they settled in Canada. Not that Canada is bad, but it was Diane's dream to live in Germany. She apparently even studied German with an eye towards settling in Germany one day. Sam doesn't speak a lick of German. Another reason why they settled in Canada. Is it worth blaming your partner if you don't settle where you dreamed? I don't know. Probably not. This is likely something that didn't just come up after marriage. This has to be something that was discussed well before hand, right? At least I would think so.

While I could watch TV (I didn't watch much TV before anyway) or play video games (stopped playing as often 10 months ago) all night, I'd rather spend my free time with BG. She's still young. However, she's got a great personality already and I don't want to not be there. Especially since she wants me to be there... for now. We'd do silly things like sit on the bed to play with dice or pull out my wooden chess set and play with the chess pieces. Or we'd jump on her mattress on the floor. It's the simple things she wants to do, that I'm more than happy to oblige.

That's not to say I don't see Sam playing with his son. He does. However, Diane feels he could be doing more and not just leaving him with her or giving their son a phone to scroll with while Sam is tasked with watching their son or just refusing to go outside because he spends his entire day outside.

What's the root cause of the blame game?

My guess would be money.

Since money is tight, Sam still laments the $400 spent on a crib.

Since money is tight, Diane laments not being in Germany where she'd have a better paying job with a better (and more relaxed) work environment.

Since money is tight, Sam has to bust his butt working outdoors. As a result, he doesn't want to spend more time outdoors.

In contrast, wifey and I, while we're not perfect, we don't have the same money worries. Recently, we have a lot more money in the bank and within our investments, which last checked in April 2018, was over $265,000.

Wifey notices a huge difference with such a large buffer. No longer does she sweat the small stuff. Paying $22 for a lunch doesn't phase her as much as it used to*.

Since we don't fight, BG isn't used to people raises their voices. When the in-laws argue, BG isn't a huge fan. She's very perceptive of this change in mood.

So what's the point of fighting or blaming each other?

Pointing fingers or assigning blame won't help matters. Really, it would only complicate things and make the situation more stressful.

Instead of blaming, fixing the underlying problems is key. Reduce your spending so you'd have more money towards debt repayment. Instead of buying expensive groceries, price match at No Frills or visit more than one grocer. Whatever you need to do, instead of complaining or blaming, just do it.

*$22 for lunch IS excessive. However, wifey and I each have a discretionary spending budget each month where neither of us cares what we spend money on. This post, back in June 2014, detailed our budget as being $325! Wow! Were we that rich? Currently, we're lowered the monthly discretionary budget to $150 a month. Much more reasonable. Considering our income has increased since 2014, this is a huge win. As long as the money is available, either of us could buy whatever we wanted. Not that we need much stuff these days.